“Blessed Are Those Who Hunger and Thirst for Righteousness, for They Will Be Filled.” Matthew 5.6 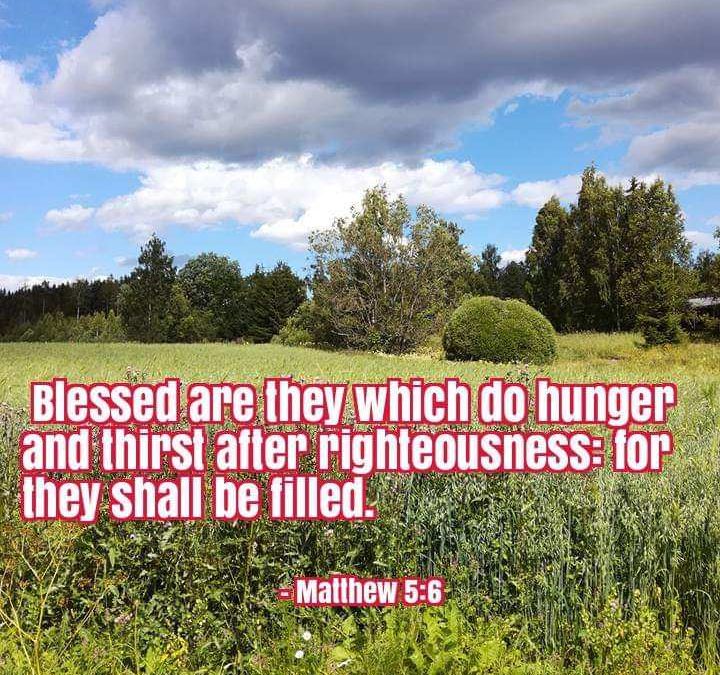 When Jesus spoke these words many people lived on the edge of starvation. Often they went hungry; children’s growth was stunted; people of all ages suffered from diseases caused by malnutrition. This is serious hunger. In a dry land people could literally die on the hot and dusty roads between villages.

My friend Matt is from California. When he went on a fourteen mile hike in the mountains he only needed to carry enough water for half the journey. Seven miles in there would be an old fashioned hand pump where he could drink all he wanted and fill his canteen for the final seven miles. When he got to the pump it was covered with thousands and thousands of bees. Yikes! Nothing else to do but to keep on keeping on. Matt grew thirsty, and began to recognize the symptoms of dehydration. He came upon hikers going the other way, so he warned them about the pump. They were very glad to hear it and turned back. But seeing Matt’s distressed they let him drink all the water he needed.

They did more than wish Matt well; they made sure he was well. They loved their neighbor as much as they loved themselves.

Here Jesus tells us to desire righteousness as much as a starving person desires food, or Matt desired water. This is more urgent than putting it on a wish list; feeling that it would be nice to be more righteous one of these days. This is placing the quest for righteousness at the top of one’s priorities.