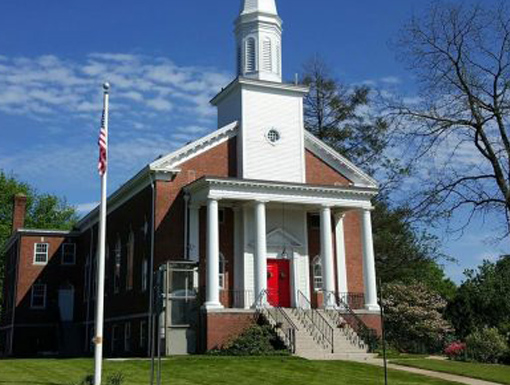 1712 The first Congregational Church was organized in a meeting house built in the newly incorporated Township of “The West Division Parish” to the west of Hartford. 164 years later, a group of that church’s members built the Elmwood Community Chapel.

1857 The Ladies’ Benevolent Sewing Society was organized in the South District. After interruption during the Civil War period this society resumed activity and had a membership of fifty by 1871.

1921 The independent Community Church was organized in March. In April, James F. English was ordained Pastor after having served as a student preacher.

1921-1925 A Sunday School of more than one hundred plus a number of other community and church organizations quickly outgrew the facilities. “Mrs. William H. Mueller was quick to offer a workable plan.” She gave 25 cents to start a building fund which would eventually supply more than $115,000.

1927 The corner stone was laid on May 8th by a delegation from the Wyllys Lodge No. 99 of West Hartford, with elaborate Masonic symbolism and one hundred lodge members in attendance.

1928 The Women’s Federation was organized.

1947-1948 Ground breaking ceremonies marked the start of construction of the parsonage on Cambridge Street. The parsonage was completed and first occupied in 1948.

1955 The main sanctuary was completely renovated and beautified. This was followed by the restoration of the parsonage in 1957.

1957 In March, the First Volume of our church records from the old chapel were given to the State Library. The Nursery School sponsored by the ECC was opened. Mrs. Kelleher was the first director of the school.

1958 The steeple was raised to the Glory of God.

1961 The 40th Anniversary of the Elmwood Community Church was celebrated on April 23rd. The 25 Bell Carillon was dedicated at a special 3 p.m. service.

1962 The death of Rev. Sterling White is noted with deep regret. He passed away while serving as Pastor. He was Pastor for 16 years.

1963 Reverend Carl L. Christensen was called to be the 4th pastor of Elmwood Community Church.

1966 Reverend Robert Loggie was called to be the first Associate Pastor in the history of Elmwood Community Church.

1967 The church mortgage was burned at the annual meeting of the congregation.

1969 The parish hall facilities were made available to Head Start Children of Greater Hartford.”
1970 Reverend Carl L. Christensen resigned as pastor after serving for seven years. Reverend William A. Jeffrey, Jr. was called to become the 5th Pastor of the Elmwood Community Church.

1971 Reverend William A. Jeffrey, Jr. was installed and Howard Mayer began his ministry as a full-time Associate Pastor. The 50th Anniversary of the Elmwood community Church was celebrated on April 18th with an 11 a.m. worship service in the sanctuary and a dinner celebration at 6 p.m. at Talcott Junior High School.

1973 Howard Mayer was ordained to the Christian Ministry. The exterior of the church was painted.

1975 The Hot Lunch Program began in the Parish Hall with Federal financing, town assistance, and volunteers from the Elmwood Community Church.

1976 Phil Conte became a lay minister. The flagpole was dedicated to Dr. English on July 4th.

1977 The music ministry of Elmwood Community Church was renewed with enthusiasm when June Day Ananikian began her music ministry.

1979 Over 200 voices participated in the First Elmwood Christmas Carol Sing that took place on the church steps. The lift into the sanctuary was installed.

1981 The 60th Anniversary of the Elmwood Community Church was celebrated on April 26th with a 10 a.m. Worship Service and a 1:30 p.m. Celebration Dinner at the Golf Club of Avon.

1982 Reverend William A. Jeffry, Jr. resigned as the Pastor after 11 years of service. Reverend David Emmons became the Interim Paster until August 1983.

1986 The Elmwood Community Church celebrated its 65th Anniversary on April 20th with a 5 p.m. dinner and a 6:30 p.m. “Sanctuary Presentation”. The Endowment Fund was established. An All-Church Cookbook was printed. Joan Pritchard became the Organist/Choir Director. Sue Nelson became the Church Secretary. The Elm Thrift Shop was opened and run by Bea Widger for the sale of used children’s clothing. New pew cushions were installed.

1987 Phil Conte, friend and Assistant to the Minister died. Ceiling fans and a speaker system were installed in the sanctuary.

1988 The Board of Missions was created. The Parish Hall was renamed “Conte Hall” in memory of Phil Conte. New Choir robes were purchased.

1989 The fire alarm system was updated and the church parking lot enlarged. Elmwood Community Church became a member-church of Habitat For Humanity.

1990 Reverend Richard Grobe was granted a 3 month sabbatical leave. The church office became computerized. Margaret Soja became the Church Secretary. New Bibles were donated for the pew and lectern. Foundation for the Future Fund was created to replenish the church financial reserves. A new piano for the sanctuary was purchased. Large-Type hymnals were purchased. A new refrigerator for the downstairs kitchen was purchased. New Fellowship room furniture was donated.

1994 Reverend Sue E. Lyon came to our church as a covenant minister. Some of our By-Laws were revised.

1996 The 75th Anniversary of Elmwood Community Church was celebrated on March 24th with Dr. James English as keynote speaker. Jerry Bilak became our organist and choir director. The death of Reverend Sue E. Lyon is noted with deep regret. She passed away while serving as Covenant Minister. Reverend John Buttrick resigned.

2003 The Thrift Shop began in the basement. The Prayer Team Ministry was formed. The Susan E. Lyon Room was dedicated as a room for Christian Education.

2004 Reverends Mary Angela and Nicholas Davis celebratated the 25th Anniversary of their ordinations. The Memorial Garden Service of Dedication was held. A Partnership with the Doon Jeon Presbyterian Church of the Republic of Korea began. The ECC Nursery School closed after 47 years; Sheryll Elwood was the final director. The first ECC Web Page was uploaded.

2006 An annual Blessing of the Animals Service was started. The 85th Anniversary of the Elmwood Community Church was celebrated on September 17th. A steak and lobster dinner was held in Conte Hall following the service. A Silver Tea was held the day before, the tea set was donated by the Women’s Federation in October of 1955 in conjunction with the 25th anniversary. A special concert by the Alfred E. White Chorale was held on September 24th. In October, 4 members of our sister church, theDoon Jeon Presbyterian Church in Korea, visited.