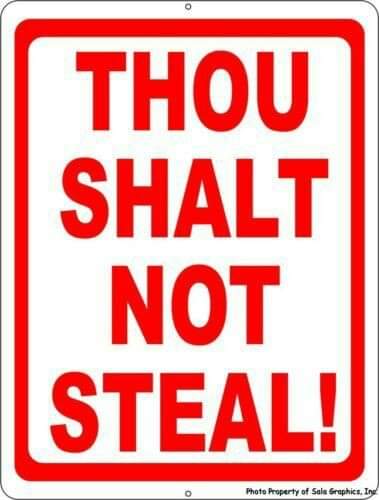 “You Shall Not Steal”

Beyond stealing something, the Hebrew Scriptures define theft as:

Theft was not punishable by death unless the theft occurred in the course of night time burglary where the victims feared for their lives.

If a thief confessed, he was required to compensate the victim by returning the stolen goods plus an added 20% of the value. To make atonement with the Lord, the thief was required to offer a sacrifice of a perfect ram.

A thief who did not confess but was found guilty was required to pay as much as seven times the value of the stolen goods. Thieves who could not pay were sold into slavery.

As noted above, under strictly controlled circumstances slavery was legal in ancient Israel. It should be noted that the Jewish people have not practiced or condoned slavery in thousands of years.

During slavery in the USA slaveholders quoted Scripture to justify their crime against humanity. But it is impossible to imagine how anyone could reconcile slavery with Jesus’ teaching. In Luke 6.31 Jesus says, “Do unto others as you would have them do unto you.” In Mark 12.31 Jesus says, “Love your neighbor as yourself.” Jesus taught kindness and mercy, compassion and selfless service to others. There is no way that Jesus would permit or condone slavery. Jesus’ heart is broken by injustice in any form. There is no expiration date on Christ’s love for Jesus is the same yesterday, and today, and forever.