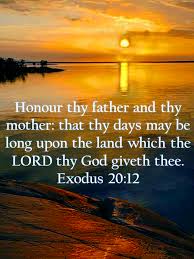 “Honor your father and your mother, so that your days may be long in the land
That the Lord your God is giving you.” Exodus 20.12

In that time and place very few people could read or write. It was a traditional, oral culture in which knowledge and lore were memorized and passed down from generation to generation verbally. It was essential that elders were respected so that the knowledge would be retained. In every situation people needed to know what had worked and what had not. The elders knew when to plant each crop. They knew when to move the flocks to seasonal pastures. Wise women knew all the herbs and could make medicines and poultices for a variety of ailments. Experienced folks could show how to tone down a youthful hot-head; they could model behaviors that fostered harmony within the community. It was absolutely essential to preserve all this knowledge. Hence, honoring the older folks.

Of course the Scripture says, “Honor your father and your mother”, which is much more specific than paying close attention to the elders of the tribe. Before our modern society with pensions, home equity, and social security, parents depended upon their children to care for them in their old age. Remember that in those days most families were multi-generational; children, parents, grandparents, and even a few aunts and uncles all lived in the same house. Unless children honored their parents, life in such homes could become a nightmare of tension and resentment.

Mark Twain touched on both these themes when he said, “When I was a boy of fourteen my father was so ignorant I could hardly stand to have the old man around. But when I got to be twenty-one, I was astonished at how much the old man had learned in seven years.” Life had taught Twain to appreciate is father’s wisdom, echoing the respect due to the elders of the tribe. Twain’s observation also reveals that over the years he came to regard his father with true affection.