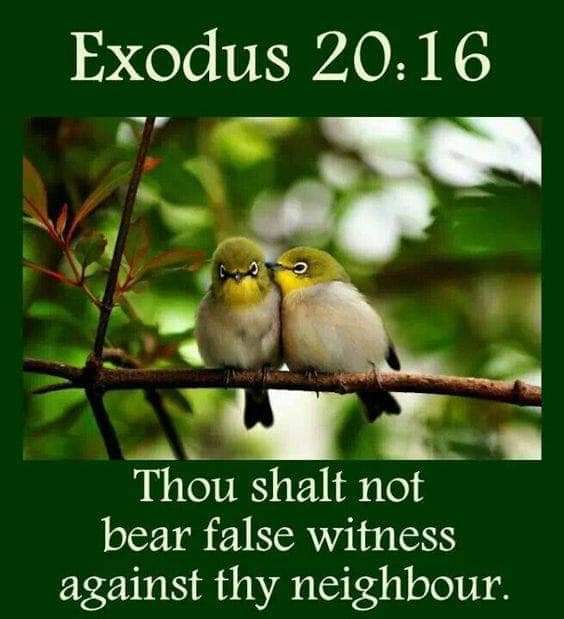 “You Shall Not Bear False Witness Against Your Neighbor”
Exodus 20.16
Bob and Jack work in a convenience store. Bob steals the money. They call the
police to investigate. Bob tells the police. “The money was there when I went into
the stockroom; when I came back it was gone.” Jack is arrested. In court Bob
repeats his earlier lie. That is a clear cut case of bearing false witness.
Jewish tradition holds that in the above case when Jack was exonerated, Bob
would need to repay the money to the store and face the punishment for the theft.
Bob would also need to pay Jack the amount that was stolen.
But this commandment applies far beyond the courtroom. It covers any form of
deception, such as withholding important information. For example, Tom sells
Fred a horse. Fred discovers that every time the horse is near a pond or stream it
lays down in the water. Fred said, “Why didn’t you tell me that horse always lays
down in water?” Tom replies, “I would have if you had asked.”
Making false claims violates this commandment. Think of the preposterous claims
made in the old medicine tents shows about the snake oil.
Trust is fragile. Once broken it is nearly impossible to restore. Few trust a liar.
Society needs to ensure that people tell the truth, the whole truth, and nothing but
the truth.