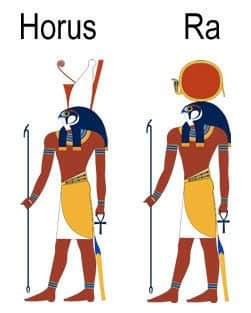 You shall not make for yourself an idol,
Whether in the form of anything that is in heaven above,
Or that is on earth beneath, or that is in the water under the earth.”

As noted yesterday the Israelites were an island of monotheism surrounded by cultures that worshiped many, many different gods and goddesses. The above representations of the Egyptian gods Ra and Horus are exactly what this commandment prohibits. Such images were harmful on several counts. First, representing foreign gods would encourage apostasy; it would lead Israel away from God. Second, the God of Abraham, Isaac, and Jacob was the all-powerful creator of heaven and earth. Any representation of God would fall far short of God’s majesty. This could only diminish God in the eyes of the people.

As noted yesterday, very few follow the old gods these days. By the time of Jesus serious Greek and Roman thinkers did not believe in those gods. Instead they saw them as archetypes, as representing natural phenomena.

But many of the people held fast to the old gods. When Paul preached the gospel in Ephesus he was so successful that he caused riots. You see one major industry in Ephesus was manufacturing little idols of the goddess Diana of the Ephesians. When people converted to Christianity, the market for little idols declines. Paul was bad for the idol business. Hence the rioting.