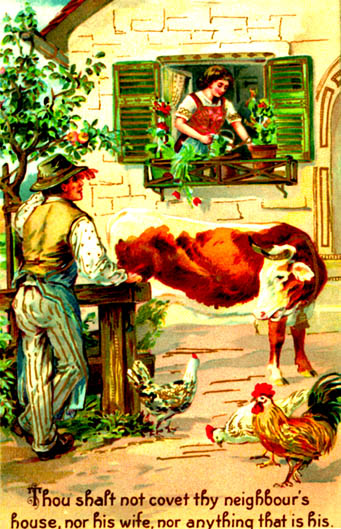 This is the tenth and final commandment. To covet is to do more than simply want or desire something; it is to lust after it. It is the difference between someone thinking, “It would be nice to have a car as nice as Bob’s”, and thinking, “I GOTTA have it. How can I get it? I’ll do anything.” A certain amount of desire is normal, it comes and it goes. It is the obsession that causes the problem. Martin Luther (1483 – 1546) expressed it this way, “You cannot prevent the birds from flying over your head, but you can prevent them from building a nest in your hair.”

Many Rabbis draw a straight line between Coveting, stealing, and murder. They teach that someone who is obsessed is far more likely to steal; perhaps they will murder to obtain the object of their desire.

Notice that there were slaves in ancient Israel. That was then. The Jewish people have not practiced slavery in thousands of years. Like decent and moral people everywhere, they stand with everyone who tries to build a world where the freedom and dignity of every person is cherished by custom and upheld by law.